Before  we move ahead we must look at these two architectures as some ARM architecture use one and some the other one. 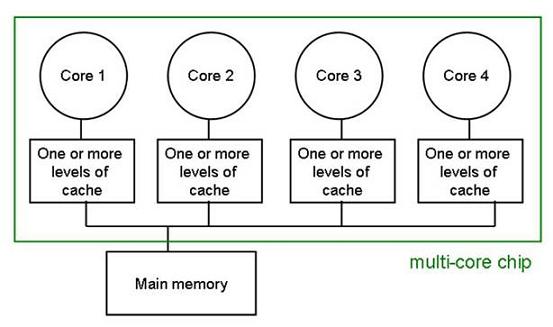 Snooping is a cache coherency protocol used in ARM systems with multiple cores and thus multiple caches. I will first explain the problem that can occur because of this setup.
Suppose the same data , say X from the main memory is there in two caches(of different cores say core 1 and core 4).  Suppose the core 1 performs some operation on data X and it gets modified to Y. But the cache of core 4 will still have data X i.e it doesn't have updated data. So, if the core 4 needs to perform some operation then it will do it in the old data and this is undesirable. The diagram below will show that how different caches do snooping on data being requested by other cache from the memory. If the data is being requested from the same memory location from where the other cache has data then cache hit happens and the other cache transfers the data to the cache which is requesting from the memory. 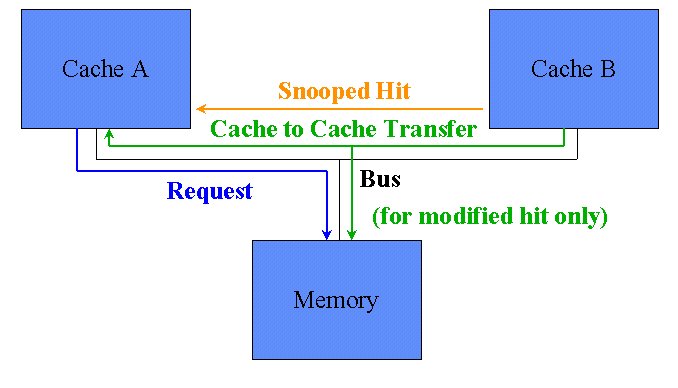 It has 37 registers (31 normal registers and 6 status registers). Barrel shifter can multiply the second operand by shifting the bits. It has 32 8 bit multipliers also for multiplication operations. FIQ uses separate registers as it is used to handle very fast interrupts(very high priority) so we want the current registers to not get disturbed so it uses separate set of registers.


Jazelle DBX (Direct Bytecode eXecution) is a technique that allows Java Bytecode to be executed directly in the ARM architecture as a third execution state (and instruction set) alongside the existing ARM and Thumb-mode. Support for this state is signified by the "J" in the ARMv5TEJ architecture, and in ARM9EJ-S and ARM7EJ-S core names. Support for this state is required starting in ARMv6 (except for the ARMv7-M profile), though newer cores only include a trivial implementation that provides no hardware acceleration.


o improve compiled code-density, processors since the ARM7TDMI (released in 1994) have featured the Thumb instruction set, which have their own state. (The "T" in "TDMI" indicates the Thumb feature.) When in this state, the processor executes the Thumb instruction set, a compact 16-bit encoding for a subset of the ARM instruction set.Most of the Thumb instructions are directly mapped to normal ARM instructions. The space-saving comes from making some of the instruction operands implicit and limiting the number of possibilities compared to the ARM instructions executed in the ARM instruction set state.
In Thumb, the 16-bit opcodes have less functionality. For example, only branches can be conditional, and many opcodes are restricted to accessing only half of all of the CPU's general-purpose registers. The shorter opcodes give improved code density overall, even though some operations require extra instructions. In situations where the memory port or bus width is constrained to less than 32 bits, the shorter Thumb opcodes allow increased performance compared with 32-bit ARM code, as less program code may need to be loaded into the processor over the constrained memory bandwidth.
Embedded hardware, such as the Game Boy Advance, typically have a small amount of RAM accessible with a full 32-bit datapath; the majority is accessed via a 16-bit or narrower secondary datapath. In this situation, it usually makes sense to compile Thumb code and hand-optimise a few of the most CPU-intensive sections using full 32-bit ARM instructions, placing these wider instructions into the 32-bit bus accessible memory.

Undefined instruction and SWI have same priority as both can't come at same time.


Some Key Points to be noted:-\

Abort happens suring instruction prefetch.
PC counts the fetched state out of fetch decode and execute cycle.
Exception can be handled only in ARM mode and not in thumb mode.
Thumb only sees from R0-R7, though there are some provisions to use it beyond that.
Since there is only 1 LR so internal branching is not possible.
Cache is organised as 16 bit so we need to take full 16 bits even for a single change.
for SWI there are 24 bits.
Thumb2 is a superset of ARM and thumb.
Cortex A has MMU.
Cortex R has MPU(subset of MMU).
Cortex M has optional MPU.
P is proportional to frequency.
Cache can use logical or physical add. space.


For any clarifications or if you have any suggestion please post comments below.
Posted by pk007 at 12:58 PM